Fortunately many of the names of sports in Spanish are similar to what they are written in English though the pronunciation is often quite different.

Below we have included a list of sports in Spanish with common things associated with each sport in Spanish:

You may be interested in our Sports vocabulary explained entirely in Spanish (no English at all).

Bádminton: (Badminton) A sport in which a raqueta (racket) is used to hit an object called a plumilla or volante (shuttlecock) over a red or malla (net). The plumilla has corcho (cork) with plumas (feathers) coming out of one side.

Básquetbol: (Basketball) This sport is also known as baloncesto. Two equipos (teams) of cinco jugadores (five players) try to score puntos (points) by putting a balón (ball) through an aro (hoop) that has a malla (net) hanging from it.

Béisbol: (Baseball) Two teams of nueve jugadores (nine players) where players from each team take turns to try and golpear una pelota (hit a ball) with a bate (bat) as far as possible. The player then tries to run around as many bases (bases) as possible and hopefully back to the place where they initially hit the ball to get a point for the team called a carrera (run).

Boxeo: (Boxing) A deporte de combate (combat sport) where two people try to golpear (hit) each other with their puños (fists) that are inside of guantes de boxeo (boxing gloves). This pelea (fight) happens inside of a cuadrilátero (boxing ring) that is surrounded by cuerdas (ropes).

Ciclismo: (Cycling) A sport where a bicicleta (bicycle) is used to travel a distancia (distance) and quickly as possible. There is ciclismo en ruta (road bicycle racing) and ciclismo en pista (track cycling).

Equitación: (Equestrianism) Sport which consists of saltar los obstáculos (jumping over obstacles) while riding a caballo (horse). Each salto (jump) is evaluated by jueces (judges).

Esgrima: (Fencing) Deporte de combate (combat sport) where two oponentes (opponents) try to touch the each other using a type of sword. There are three different types of swords that can be used, sable (sabre/saber), espada (épée) or florete (foil). The weapons do not have a sharp punta (point) or filo (edge).

Esquí: (Skiing) Sport which consists of sliding down nieve (snow) while standing on two esquís (skis).

Esquí acuático: (Water Skiing) Water sport where a person on esquís (skis) holds onto a cuerda (rope) and is pulled along behind a lancha (boat).

Fútbol: (Football - Soccer) There are two teams of eleven players each. The objective is to get the pelota (ball) past the arquero (goalkeeper) and into the opponent's arco (goal). The teams gets one point when they hacer un gol (score a goal).

Golf: (Golf) Deporte individual (individual sport) that consists of hitting a bola (ball) into each one of the 18 hoyos (holes) found on a special course. The idea is to do this with the least number of golpes (hits) possible.

Halterofilia / Levantamiento de pesas: (Weightlifting) Sport where you need to levantar (lift) una barra (a bar) with pesos (weights) on each side of it. Whoever lifts the most peso (weight), wins.

Hockey: (Hockey) Two teams try to get goals by using a bastón or palo (stick) to move and hit a disco (puck) in hockey sobre hielo (ice hockey) or a pelota (ball) in hockey sobre césped (field hockey).

Piragüismo: (Canoeing / Kayaking) Deporte acuático (water sport) where a kayak (kayak) or canoa (canoe) is propelled along the water using remos (paddles). Sometimes this sport is called Canotaje in Spanish.

Remo: (Rowing) Deporte naútico (water sport) where remeros (rowers) use one or two remos (oars) to help push the embarcación (boat) through the agua (water) as quickly as possible. The remeros (rowers) sit with their back towards the direction they are going in.

Rugby: (Rugby) Sport with quince jugadores (15 players) per side. The objective is to score an ensayo (try) by crossing into the zona de marca (in-goal area) of the opposing team. The game is played with a balón de forma ovalada (oval ball).

Surf: (Surf) Sport where a surfista (surfer) stands on a tabla (board) and rides the olas (waves)

Tenis: (Tennis) Sport where a raqueta (raquet/racket) is used to hit a pelota (ball) over a red (net). The opposing player then tries to return it. The cancha (court) is usually made of césped (grass) o arcilla (clay).

Tiro con arco: (Archery) A sport in which an arco (bow) and flechas (arrows) are used. The objective is to get the flecha (arrow) as close as possible to the center of the diana (target).

Voleibol: (Volleyball) Two teams try to put a balón (ball) over a red (net) that is suspended in the middle of the campo de juego (court) and make it touch the ground on the opponent's side. 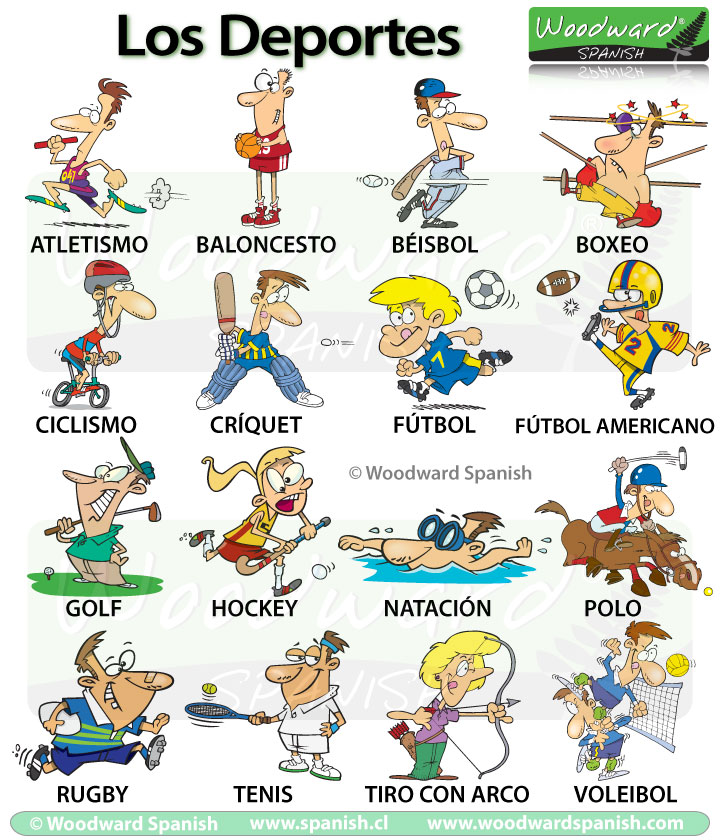 See our information about Sports vocabulary explained in Spanish 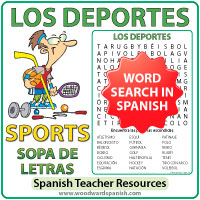 If you found this Spanish Vocabulary about Sport interesting or useful, let others know about it: